Let us Help You Make an Amazing Video!
Production Services:

We offer everything you need to get your message & IDEA out! 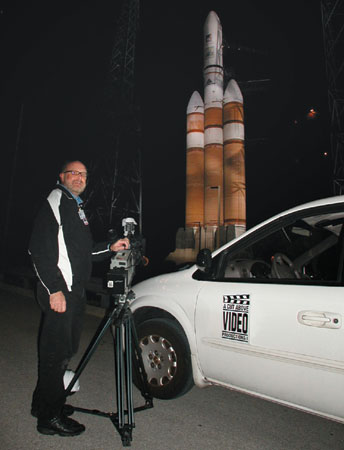 Bill shooting on the Launch Pad during a Delta Heavy Launch on December 21st, 2004
Read about This Incredible Shoot Here

Electronic Field Production (EFP) or Electronic News Gathering (ENG) videography is accomplished with a variety of TV production equipment including a 4K video camera or large format 5.7K cinema style camera. Recording options include the camera's on board recording media or outboard digital recorder. Lens options include a standard zoom lens and a set of cinema primes for large format recording.

The 13' x 25' studio space is configured with a 14’ high lighting grid with full set of Scoops, Fresnels and Ellipsoids with an 8 channel dimmer system. A 13’ wide by 11’ high chroma key green back wall, side walls and floor for full head to toe chroma key capability, camera, shotgun microphone on a boom and production support equipment are all in place.

TV studio production configurations include either a 4K camera or large format 5.7K cinema style camera, which are also available for field production. An in-house 17” TelePrompTer may also be configured for studio or field use. For those with poor eyesight a custom built 32” studio TelePrompTer is available.

A separate audio booth is interfaced with the video editing system and has sufficient space for interviews with multiple people. A phone patch is available for remote monitoring and direction as well as phone recording.